Islam and Muslims have been part of American history for centuries, but most people are unaware of this fact. They think Islam in the United States is a relatively recent phenomenon and, hence, alien and un-American. In reality, there is a centuries-long recorded history of a Muslim presence in America, and Muslim Americans have contributed much to the nation they call home, as noted by President Barrack Obama: “They have fought in our wars, they have served in our government, they have stood for civil rights, they have started businesses, they have taught at our universities, they’ve excelled in our sports arenas, they’ve won Nobel Prizes, built our tallest building, and lit the Olympic Torch.” This record of contribution and service is extensive, but Islamophobes, sadly, overlook or conceal this fact.

Far from being a foreign presence, Muslims have exerted a positive influence on American culture even greater than their numbers would suggest from the very beginning.

Their aim, by any and all means, is to rip out the interlaced thread of Muslim historical and contemporary presence from the American tapestry. But do they not realize that tearing out one thread can unravel the whole? Still they want to ostracize Muslim Americans, to blame the Muslim community collectively for any extremist act anywhere on the globe by any individual(s) who purport to represent the Muslim faith. Yet we hear little about Christian terror groups around the world like The Army of God and The Concerned Christians in the U.S., Eastern Lightening in China, and The Lord’s Resistance Army operating in various countries in Africa, all of which are actively carrying out terror attacks in the name of Christianity.

It’s truly unfortunate that whenever a Muslim commits an act of terror, the media lets stand, and even exacerbates, the false notion that Muslim extremism is a unique phenomenon. Then we hear Donald Trump call for profiling and increased surveillance on Muslim communities, and a total ban on Muslim immigration to the U.S. Thankfully, political leaders from both parties have either denounced or distanced themselves from Trump’s Islamophobic remarks.

Negative attitudes toward Muslims in America, however, is far from fading and many Americans only know about Muslims through negative media coverage. A YouGov poll found that more than two-thirds of people surveyed have no Muslim friends or co-workers. Asked if they have ever been inside a mosque, 87 percent of respondents said no. This underscores how important it is to make our fellow Americans familiar with Islam, Muslims, and the historical presence of Muslims in our nation. Noted author Jerald Dirks has pointed out in his book “Muslims in American History: A Forgotten Legacy” that “written documentation, linguistic evidence, and reports of early Spanish explorers of the New World suggest Muslim contact with the Americas prior to Columbus. Muslims and Moriscos sailed with Columbus and were part of many of the Spanish explorations of the New World. Muslims comprised a significant percentage of the enslaved Africans who were brought to the Americas, and many Islamic residuals have found their way into contemporary African-American life and culture… Beginning in the late 19th century, successive waves of Muslim immigrants enriched America, and the phenomenon of Americans converting to Islam became increasingly widespread.”

James H. Hutson who has worked for the Manuscript Division of the Library of Congress and authored many books, including “Religion and the Founding of the American Republic” (1998), has written, “The Founders of this nation explicitly included Islam in their vision of the future of the republic….Far from fearing Islam, the Founders would have incorporated it into the fabric of American life.” Lynn Stuart Parramore, with a doctorate in cultural theory, has written, “…Thomas Jefferson purchased a Quran to learn about the Islamic legal code – the same Quran that was used in the swearing in of Muslim Keith Ellison to the U.S. Congress. In 1776, John Adams published ‘Thoughts on Government,’ which praised the prophet Muhammad as a ‘sober inquirer after truth.’ Ben Franklin set up a non-sectarian meetinghouse in Philadelphia, declaring in his autobiography that ‘even if the Mufti of Constantinople were to send a missionary to preach Mohammedanism to us, he would find a pulpit at his service.’”

As we see, Islam and Muslims are not a new or foreign presence in this country. Muslims’ love for, and attachment to, America is no less than that of any other community or faith group. To quote Dr. Parramore once more: “Muslims wish to be seen as Americans, and a look at America’s Islamic roots proves that they have every right to be – even more, perhaps, than those who rail against them. It’s time to clarify the confusion about the role of Islam in early America and remind ourselves that far from being a foreign presence, Muslims have exerted an influence on American culture even greater than their numbers would suggest from the very beginning. The real foreign presence is Islamophobia, which is completely at odds with America’s founding principles.” We hope that all Americans will get the memo that Muslims, as in the past, are contributing to and serving the American ideal, and will continue to do so, eager to enhance the common good and help fulfill America’s greatest potential. 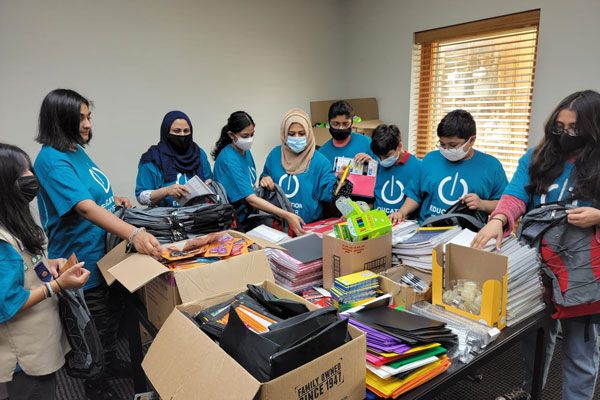