The coronavirus pandemic has exposed and continues to widen the gap between the rich and the poor in the United States. The economic fallout caused by lockdowns, social distancing, and avoiding crowds is causing the failure of countless small businesses and eviscerating the middle class. Estimates are that 60 percent of businesses that closed down due to the pandemic will never reopen. Low-income individuals and families are entrenched more deeply into poverty and disadvantage. Estimates are that millions of Americans will lose their health insurance by the end of the year. These heart-wrenching realities leave regular Americans feeling stressed and uncertain about the future.

Yet, during the pandemic-driven recession, the rich have seen great increase in their wealth, largely due to the tax-break in billions written into the CARES Act. This same first COVID relief bill provided just $1200 to the average American even though multitudes were losing their jobs due to the lockdowns.

At the same time that we are dealing with the pandemic, police killing of unarmed Black Americans has driven thousands into the streets in protest of police brutality and their impunity from prosecution. And now we are on a downhill slide to a contentious election in November. The role of the media during these difficult times should be to provide accurate information, to draw the public’s attention to important matters, and to do so while avoiding escalation of political and social tensions. The mainstream media, on both sides of the political spectrum, present themselves as unbiased upholders of truth. Yet, a peek behind the curtain reveals, what most of us know or suspect, that the bottom-line consideration in decisions about media content is ratings and revenues. In the process they are feeding divisiveness among regular Americans.

“Whoever fights monsters should see to it that in the process he does not become a monster. And if you gaze long enough into an abyss, the abyss will gaze back into you.”

Reporting at taibbi.substack.com, Matt Taibbi writes: “Beginning on September 1, tapes were released of conversations between former Trump lawyer Michael Cohen and top CNN figures, including Chris Cuomo and president Jeff Zucker. The conversations between Zucker and Cohen especially go a long way toward explaining how Donald Trump became president. We see clearly how Zucker, famed now as a supposed stalwart force of anti-Trumpism, actually encouraged him during the 2016 campaign, to the point where he offered Trump help on how to succeed in a CNN-sponsored debate.”

In one of the tapes, Zucker says to Michael Cohen: “I think the other guys are going to gang up on him tremendously, and I think he’s going to hold his own, as he does every time. He’s never lost a debate. And do you know what? He’s good at this… he’s going to do great.” Taibbi notes that to network executives, Trump is “first and foremost a commodity, and an extraordinarily valuable one at that. ”A profit-driven media does not really care about who wins an election, about social justice, about the suffering of the masses. The media, on both sides, are willing to fan the flames of division and enmity if it brings in greater revenue. The bottom line for those who make the network decisions is money, not truth-telling and the common good. They care about the financial bottom line. Creating divisiveness is fine if the money keeps flowing into their coffers.

We, the American citizens, need to reach beyond the parameters set by the ruling class, reach out to one another, especially those who think differently about issues than we do. We need to speak with one another and come together. Muslims are the people of the middle way and, as such, they can act as role models. “And so, We have made you a community of the middle way so that you may be witnesses over the people and the Messenger a witness over you…” (Quran 2:143). This contrasts with the business model of the mainstream media which hardens viewers into an extreme position, that of the ideological camp the media outlet represents. If one only watches MSNBC or only Fox News, it is inevitable that his or her views will be skewed one way or the other. The way to counter this is to seek out liberal, independent/centrist, and conservative viewpoints on issues. “The other side” often is able to see flaws in their opponent’s argument and to bring to the table factors and even nuances that are ignored by one side or the other. I can best decide for myself if I have heard various opinions and viewpoints.

One example demonstrates how the media skews right or left. Fox News generally portrays Black Lives Matters and Antifa as radical movements, looking to create chaos and confusion, with an agenda to violently bring down the United States and restructure it according to BLM’s Marxist or Antifa’s anarchist liking. MSNBC, on the other hand, generally portrays them as positive anti-racist and anti-fascist movements, fighting the good fight for social justice and progressive reforms. Might it be that the truth is somewhere in between? In fact, some independents express the view that one can completely support the principle promoted by BLM and be committed to dismantling systemic racism while at the same time take note of the corporate sponsorship of BLM; and that the self-declared identity of BLM founders is as “trained Marxists.” The group has received millions of dollars from ultra-capitalist corporations and wealthy individuals who are strangely unfazed by the Marxist characterization of the organization. Traditional Marxism is all about overthrowing capitalism, about class conflict and politics. It is also a bit strange that BLM, as an organization, makes everything about race and race relations. That is not Marxist. Some independents also suggest that Antifa is a cultish affiliation of violence-prone young men who have become fascist-like in their purported fight against fascism, but not necessarily with an agenda to topple the U.S. government.

About a year ago, on the Don Lemon show on CNN, a well-known and highly acclaimed liberal(he will not be named here), an advocate for social justice and equal rights, a man who is affiliated with the political party that sees itself as more mature, more compassionate and decent, than the Republicans, was a guest along with a conservative, a supporter of Trump. The conservative guest was making a point and doing so in a most respectful and decent way. He said something directly to the politically progressive guest that triggered an extreme reaction. This advocate of fairness and justice told the conservative guest, with vitriol and a harsh, condescending tone, something like “Who are you? Why are you on tv? Why are you speaking to me? Don’t talk to me, talk to Don.” The persona he presents fell away and he showed himself to be a nasty individual, in that moment, not an enlightened man. It’s been said that you become what you fight against. The philosopher Nietzsche wrote: “Whoever fights monsters should see to it that in the process he does not become a monster. And if you gaze long enough into an abyss, the abyss will gaze back into you.”

This brings to mind the following verse in Qur’an where Allah SWT warns us, “O you who believe! Be steadfast as witnesses for Allah as to justice; and let not the hatred of a people prevent you from being just…” (Qur’an 5:8).

A takeaway from this is that Muslims should make sure to accompany their social justice activism with continual self-examination. This entails guarding one’s integrity and keeping the ego in check, making sure not to take on the traits that one is fighting against, and seeking out information from a variety of sources and political viewpoints so as not to fall to the extreme right or left, to avoid being so ideologically entrenched that the opponent becomes “the enemy. ”Then taking the time to use critical thinking and common sense to form one’s own opinion is the judicious and moderate path. This is the antidote to the tendency of people to like issues presented in reductionist, black and white terms, when many things are more complicated than that.

Seeing the full picture, listening to all sides of the story, weighing the varying perspectives, is not the strength of an ideologue. To do so requires integrity, an integrity that is more than intellectual adherence to one’s moral and ethical principles. It is that, but it is also honesty with self and others, self-accountability, and the willingness to modify one’s view if new evidence is brought forth. For a Muslim, integrity is also recognizing the rights of all other people and seeking to do no harm. This is an integrity that is compassionate and kind.

Integrity means ensuring that my behavior matches my principles, and this is a safeguard against hypocrisy. It is interesting that the roots of the word hypocrisy mean “stage actor, hence one who pretends to be what he is not,” “to play a part, pretend.” The hypocrite is one who pretends to adhere to a high moral and ethical code, but he has motives, cares about how he behaves only in so far as he maintains a good reputation with the people, and/or he behaves in private in a way that betrays the principles that he pretends to adhere to when in public.

If our leaders had integrity, held themselves accountable, and felt compassion toward regular, hard-working people, the pandemic would have been handled in a much more competent way; congress would never have awarded billions of dollars of tax cuts to corporations and wealthy individuals while designating a measly $1200 per person during the economic crisis caused by the pandemic. Integrity and accountability would break the blue code of silence so that police officers would report their fellow officers’ misconduct including brutality and unlawful killing. The media would not use profit and ratings as the bottom-line criteria for content, and they would not present one side of the story only, in essence, lying by omission. Public figures, including corporate leaders, would not be two-faced.

Talking About integrity and Demanding Leaders of that Caliber

We need to demand and elect leaders who care more about truth than winning; who care more about the common good than their own selfish interests and those of the billionaire class; who care more about people than profits. Let’s have deeper discussions with people about integrity, both with people who are like us politically and those who aren’t. Let’s always keep in mind that the ruling class uses “divide and conquer” in order to divert attention from things like income inequality, the right to a living wage, affordable housing and healthcare, and the right to a good education. Divide and conquer includes making everything about race so that racial tensions heighten; making everything about grievance and identity politics so that more and more people feel like victims and each atomized group vies for attention and relief so that people are alienated from one another rather than united; making political correctness so extreme that just about anything can be perceived as offensive, resulting in a “cancel culture.” Our discussions with people should aim to unite, not divide. We can learn from people who have a different perspective than we do and understand what their experience has been that brought them to that perspective. And we can most likely discover that we have some common values and concerns. This nation needs to begin a process of uniting and healing.

“We must learn to live together as brothers or perish together as fools.” — Martin Luther King, Jr. 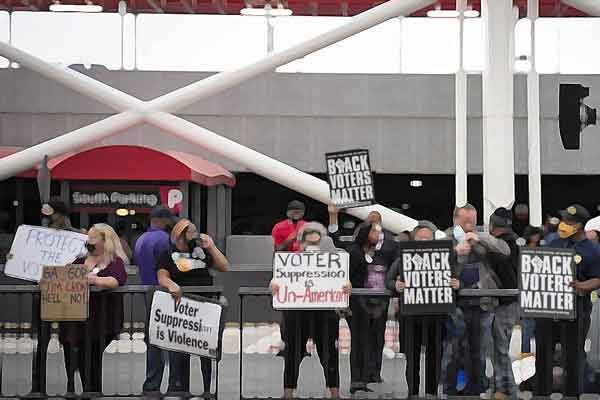