It is January 7, 2015 and winter has finally arrived, infiltrating my coat with icy fingers. Craving strong coffee, served in a glass in the French-North African style, I enter the familiar warmth and murmur of a local cafe. Above the chairs and tables the television flickers, as always, but instead of the usual soccer game, there are live images of a terror attack in Paris. A masked gunman executes a defenseless man lying on the sidewalk. Then the footage of the despicable act is replayed again and again. Such a deed, done in the name of God and His Prophet – what a cognitive dissonance!
I order my coffee and stare at the screen. I notice that the others in the café seem to ignore the news. I wonder why.
All around the world others are receiving such news in bits and pieces flowing along the facebook river, or communicated in cascades of tweets, another mass casualty shrunk down to the size of a smart phone. Syria’s 200,000 dead and millions suffering fit into this tiny, tech-compressed world, so why not a few cartoonists in Paris as well? And in response, our feelings shrink in size to shame, denial and even, perhaps, disinterest.
Faced with mean-spirited cartoons, extremists must have felt strong anger and resentment. They have acted out their fantasy, an angry video game version of jihad. In response, anti-Muslim hooligans take revenge through vandalism and threats against Muslims. Competing narratives of resentment unfold, in a flickering nightmare reflected in the media’s ever-roaming eye and delivery of all-consuming sensationalism. We, for our part, wander through our social media lives chasing insatiable appetites, and sleepwalking through rituals of selective attention and forgetting. Propaganda controls the devotee of Fox News and (al Qaeda’s) Inspire alike. Media is both victim and victimizer. Can we be surprised to find ourselves in this colorful trap? As Marshal McLuhan observed many years ago, “the Medium is the message.”
Of course for a Muslim, the true Message of the prophets exists on a higher spiritual and existential level. The vexing challenge of receiving and properly understanding this gift of wisdom predates the stranglehold of social media. Like other spiritual traditions Islam teaches how true freedom of spirit is yielded out of simplicity and purity of character, grounded in the clarity and carefully focused perceptiveness of faith. But how far we are from such a state of being!

When there is a crisis in our community, like a particularly well-publicized terror attack, our leaders step up. Who and what are Muslim leaders? I don’t just mean scholars and imams. Leadership is defined by service to the community – this takes many forms, and in our community, many volunteers. There is no shortage of crises. And so it is important that we share responsibilities and skills; that we act locally, nationally and globally, and not just on facebook; and that men and women of all ages feel that they can be of service. Leaders must make room for other leaders. And some must help coordinate a public message.
Those of us who speak publicly (even if only occasionally) learn to “message” to the media, meaning that we spin a specific version of events in the service of our social and community interests. If we fail to develop effective outreach to the media, if we fail to be proactive, then the media will frame the issues in ways that may exclude, defame, or even demonize our community.
To adapt to the very short attention span of most media consumers the mainstream media likes sound bites and slogans. I find that slogans are like fast food—easy to pop one in the mouth but after you chew on the words a while there is not a lot of nutritional value and you may even find a bitter aftertaste. However I do not think we can ignore the challenge of getting our voices heard, at a time when the noise level is so high and the public attention span is so short. When there is a terror attack, there is more noise; but also that famous window of opportunity opens. Will our engagement bring a breath of fresh air or merely add to the clamor?
Each time an incident occurs we ask ourselves “Do we respond or would that give undue attention to uncomfortable issues or to our opponents? What is our “frame” –that is, how do we want the media to structure its reporting? Are the media even remotely interested in our point of view, why or why not? Do we know journalists who are responsible and sympathetic and interested in our perspective? Do we have allies that can help amplify our voice and make the issue not just a “Muslim issue” when it is a wider human concern? Does yet another public condemnation of terror suggest that we are apologizing, when we are not in any way responsible? And even then, is it ever worth our time to speak on Fox networks?”
And each time an attack occurs there is a wide range of responses. Some Muslim spokespeople are in favor of speaking to any and all media, while others suspect this eagerness to be in the public eye to be a form of self promotion. While a range of response is normal, I am disappointed to hear some colleagues perceive public statements against terror to be craven apologies. To those colleagues, I ask: why do you think such statements are apologies? Isn’t this a valuable opportunity to publicly and clearly affirm the values of our faith and to speak from the heart? But it is important to speak publicly with sensitivity and a sense of compassion for others suffering at home and across the world. Let us put our egos aside and serve, and may our intentions be pure and our efforts accepted.
Seeing the images of the Paris attack, I feel a surge of adrenalin along with a sinking feeling. This anxious emotion connects less to the caffeine of my very good French style coffee than to memories of the aftermath of the 9/11 disaster. I cannot tell what 1/7 will mean for the French, but I hope that we will not see a deeper cycle of backlash, intimidation and violent outbursts. I have written to French consular and cultural affairs colleagues and also to PEN American Center, urging them to stand together with Muslims. I recall six months ago organizing a press conference to take a stand against the onslaught of ISIS and the mass killing of Yezidis and other minorities. But now I hope someone else will step up and speak out. We all share this responsibility.

I worry about Muslim leaders caught forever in a public relations mode. One danger of such a PR mentality is the creation of an enormous gap between the ideal and reality

Yes perhaps we are all caught in that “Muslim bubble.” But what happens next? How do we find an honest basis for hope in a world with very serious issues? I know these two facebook friends (whom I have only recently met) care deeply about the community and are not simply venting. Like mine, their words were written during a wintry January week when despite the attack in Paris, other terror attacks in Yemen, Palestine, Iraq and Turkey, received little attention in the US press; when across the USA deep distrust between police and community is manipulated by politicians just as deeply divisive; a week when merely for advocating for freedom of religion, a blogger named Raed received a sentence of ten years of jail time, with 1000 lashes in the US-allied nation of Saudi Arabia; a week in which Ms. Pamela Geller continued to promote Islamophobia as a form of “freedom of speech” in the mass transit systems across the USA.
What a cavernous gulf between cultures and legal systems. But let’s not react. Let’s not hide in bubbles. Let’s not be paranoid cartoon Muslims, speaking in sentence bubbles. Let’s not be video game Muslims on the warpath or indeed any other sort of caricature or imaginary Muslim. Sometimes words get in the way of what is real. Words and images can multiply out of control. Like idols in some dark primitive temple they seem to move and take shifting forms in the mind. But violence does not make them vanish; on the contrary like smashed mirrors they fall into fragments; and the faces of more and more idols are reflected in the gleaming shards.
Mass crucifixions; pseudo-democratic fictions; the suffering of Muslims and human beings from Burma to Brooklyn. What would be the appropriate language for this broken, sharp edged world? Perhaps someone will construct a narrative that is informed by revelation and tradition, by creativity and compassion. A narrative that “tells it like it is.”
Meanwhile, the coffee has been drunk, a little black bitterness at the cup’s bottom winks back at me. Was it Fair Trade?
And the rest is silence.

Adem CarrollAuthor Adem Carroll is a New York Irish Muslim, a civil rights activist, is associated with Muslim Consultative Network. He served as 9/11 Relief coordinator for ICNA Relief from 2001 to 2006. 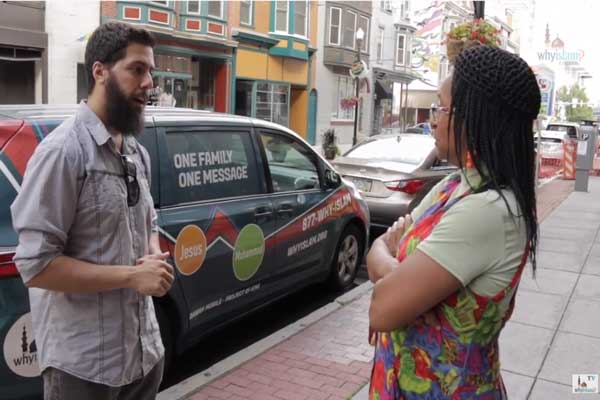