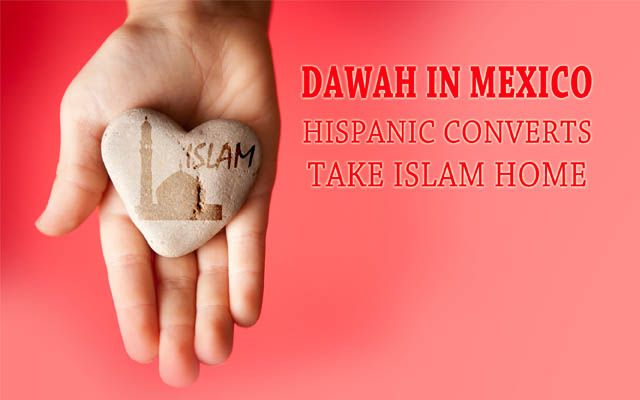 On June 26, 2012, as Nahela Morales-Essouiri stepped off her plane and she and her son Andrew walked through the arrival gates in Mexico City, she was unsure of what to expect from the place she once called home. Visiting her country for only the second time as a Muslim woman wearing hijab, Morales was on a special mission.

Visiting her country for only the second time as a Muslim woman wearing hijab, Morales was on a special mission.  She was unsure of what to expect from the place she once called home

Morales, like other immigrant Latinos in the US who have accepted Islam, was eager to introduce Islam to her family members in her native country and dispel common stereotypes and misconceptions. She had also volunteered to take essential Islamic materials and monetary donations to the emerging Muslim community in Mexico City. Her journey began at 3 a.m. in her home in Union City, New Jersey where she prepared to go to Newark Airport to board the 6 a.m. connecting flight to Detroit, Michigan which would take her to her destination.

Prior arrangements were made with the religious leader of the Islamic Center, Al-Hikmah, in Mexico City to pick up the seven extra bags Morales had packed with educational materials and clothing donated by Muslims in the US, especially for this trip. She met Imam Isa Rojas and his wife, Moserratt Pimentel, for the first time in the airport and presented them with the luggage loaded with the Islamic provisions. She was then greeted by family members who drove her to her grandparents’ home, where she would be staying during her three week vacation.

The following day after performing her morning prayer in her guest room, she recalls, “I sat there for a while crying, reflecting on every aspect of my journey the previous day… the struggle to get everything on and off a cart at the airport while people stared and still being able to smile at them as our Prophet [Muhammad] told us, making sure that the missing luggage would get there on time, hearing people whispering, ‘wow, she speaks perfect Spanish,’ and the hundreds of stares… that was all super easy.”The hard part, according to Morales, was her family’s immediate response to her attire.“My grandmother saying she does not want to see me with ‘that thing on my head because they don’t wear that here’ the night before in front of the cousin who had physically attacked me a few years back because of the hijab [Islamic head covering]was not [easy].”

Her 103-year-old grandmother’s comment brought back bitter memories for Morales, who had received criticism four years prior for embracing the Muslim faith which obliged her to pray five times daily and don a headscarf and flowing garments to cover her shape. Although Morales was raised for years in her grandparents’ home in Cuernavaca, Morelos, she was now a stranger in her homeland because she is Muslim.

In 1979, Morales’ mother took the risk of entering the US illegally and alone, leaving her infant daughter behind in Mexico under her grandmother’s care, to search for a better way of life. When Morales was 5-years-old, she was finally reunited with her mother who had settled in Los Angeles, California. After the Immigration Reform and Control Act was passed in 1986, the family was able to apply for amnesty and obtain US citizenship.

Even as a US citizen, however, Morales still felt like a foreigner. At the age of 12, she revisited the land that gave her the most memorable years of her life, and she continued to visit often thereafter, even after moving to the East Coast in 2001.

One of the highlights of the trip, according to Morales, was having the chance to pose side-by-side for a photo with a Mexican nun, a wonderful way to show that modesty is an integral part of both Catholicism and Islam

However, this most recent visit was unlike any other. “I promised myself that I was there with a purpose and was going to carry it out no matter what,” Morales said. “The purpose was to show my family that my faith was here to stay, not a trend or phase like some thought, but very strong, true, firm, and most importantly, that I was only there to convey the message, and not to convert anyone.” As an Administrative Assistant and National Spanish Dawah Coordinator for WhyIslam, a project of the Islamic Circle of North America, Morales was more than prepared.

One of her daily tasks in the WhyIslam office in Somerset, New Jersey, is to take calls from the 1-877-WhyIslam hotline, where people of all faiths in the US and Canada are encouraged to call to ask questions about Islam. The project advertises all over the nation, online, through mailings, and billboards inviting Americans to get answers. Such projects are unheard of, or perhaps only in the very beginning stages in Mexico; but Morales hopes to change that.

Last year, when Morales began to plan her trip to Mexico to visit relatives, she called the mosque near her home. During her conversation with Imam Rojas, she learned about the resources that were lacking at the Al-Hikmah Islamic Center. She then spoke with friends and colleagues and formed an online network called “United for Dawah in Mexico/Unidos para Dawah en México.” Along with WhyIslam, seven other Islamic organizations volunteered to assist Morales on her trip and provided numerous resources including Islamic clothing for the new converts in Mexico City, pamphlets and audio CD’s about Islam, Islamic children’s books, and toiletries.

This was an unprecedented collaboration of Islamic organizations in the US with the aim of assisting a growing Muslim community in Latin America. With Hispanic converts to Islam on the rise in the US since 9/11 —according to statistics in The American Mosque Report 2011 —many of these new converts, like Morales, are becoming involved in Islamic propagation and reaching out to their families back home.

Tanya Cantu, a Spanish convert and mother of four living in San Antonio, Texas, is the founder of Muslimahs [female Muslims] Covered With Care (MCWC), one of the organizations which joined “United for Dawah in Mexico.” MCWC specializes in providing Muslim converts around the world with modest attire. They provide monetary and clothing donations and have distributors in the US, Canada, Europe, and Australia. Through MCWC, Cantu wishes to reach out to new converts to comfort them during a time, she knows, they are at their most vulnerable. She relates, “When I converted to Islam from Catholicism, my family accused me of rejecting our culture because of their misconceptions about Islam.” Cantu remembers receiving her first Islamic dress from a Muslim friend after her conversion in June 2006, during the month of Ramadan, a gesture which inspired her work.

After hearing about Morales’ trip to Mexico, she was immediately on board, “We have been working together on a few projects and early this year, Sister Nahela shared with me the news about going to Mexico to visit her family. We discussed her huge desire to provide the Masjid Centro Al-Hikmah with much needed items. This was one of our many goals; to visit remote countries where the demand [for Islamic attire]is high. It was a great opportunity for MCWC to reach out and assist the Muslim women in Mexico.”
Some of the other organizations that contributed material were Islam in Spanish, Hablamos Islam Niños (We Speak Islam, Kids), Radio Islámico (Islamic Radio), and NHIEC, who raised $1000 for the Hikmah Center and presented them with a plaque commemorating their dawah efforts in Mexico.

In addition to bringing the donations and Islamic educational materials for the Islamic Center, Morales spent time with Imam Isa Rojas and community members, offered the female worshippers classes on Islamic hygiene, provided advice to the Muslim women on various issues, and participated in an educational expo in the capital to diffuse negative stereotypes about Islam. Morales also encouraged the members of the mosque to set up an outreach committee. She felt her involvement within the safe haven of the small Mexican Islamic community was successful, but dealing with her own family was the bigger challenge.

Eventually, however, during her three week stay, things began to change. Her uncle surprised her when he confessed that he had purchased a Quran weeks before her visit, and other relatives began asking her about Islam.“Within a few days of my stay, I felt everyone was more at ease and questions began to flow from every direction. The questions never stopped or maybe it felt that way because I was always stuck in a conversation to clear up as many misconceptions as they had.” The cousin who had insulted her a few years previously and ripped off her hijab, now bought her some scarves as gifts. And when her 8-year-old niece tried Morales’ head covering on out of curiosity, family members smiled and said she “looked beautiful.”

The opportunities to talk about Islam did not stop at her family’s home. While sight-seeing in Mexico, Morales was also approached by strangers who wanted to learn about Islam. “I did notice when I flashed a huge smile, the women’s faces would light up and they would admire my attire by pointing at it or they would come to me and in their limited English they would tell me ‘muy beautiful’ [very beautiful].” She carried WhyIslam brochures and educational Islamic CD’s in Spanish to hand out to anyone who was curious. One of the highlights of the trip, according to Morales, was having the chance to pose side-by-side for a photo with a Mexican nun, a wonderful way to show that modesty is an integral part of both Catholicism and Islam. The photo went viral after Morales posted it on Facebook and she hopes that it will serve as a reminder of what Muslims and Latinos have in common.

Since returning to the US, Morales continues to collaborate with the community in Mexico and Islamic organizations like MCWC, to facilitate dawah and the distribution of resources to Muslims in Mexico.