Back when I embraced Islam as a bright-eyed youth twenty-four years ago, there wasn’t much with an Islamic flavor available in the fiction and literature department. At the time, I didn’t really notice it for I was tearing into every book on sirah, hadith and aqeedah that I could lay my hands on. It was a brave new world that I entered. Likewise, religious writings were a new type of subject matter for me, given that for my entire life before that I was a big fan of science fiction/fantasy literature. Ah, the heady days of the new convert: zeal, enthusiasm and the fuzzy promise of the perfect world just over the horizon! Life is so simple for the one-track mind.

Too many youth are being raised on a diet of literature that has no mention of Islam or Muslim values, and that contains ideas that are abhorrent to a genuinely Islamic perspective

At some point, I started getting involved in youth activities, camps, and classes. I began as a Sunday school teacher in a masjid and then eventually graduated to summer schools, youth camps, and youth clubs. By 1992, I was a full time teacher in an Islamic school (this is not at all an unusual track for a convert to follow). Along the way, I began to realize something: even as the youth were learning from some pretty boring textbook materials, they had absolutely zero literature available to them that reflected any type of Muslim identity. In vain, I searched through the catalogs of Muslim booksellers for titles I could recommend to those precocious readers who seemingly devoured every Goosebumps or Baby Sitters Club book they could find. There were a few small books available, but they were mostly directed towards little kids, or they were so polemic and obviously “guided-reading” material that they had no appeal to the youth.

I felt compelled to begin writing some short stories I could share with young readers. I had never done any writing, but I did have a very active and creative mind – honed by many years of reading sci-fi and playing Dungeons and Dragons. By the winter of 1992, I had enough stories and poems to put together a small book. I entitled it “The Seafaring Beggar and Other Tales.” A brother who worked at the Islamic school (the bus driver) worked on the side for a small xerox-type shop, and he offered to print 300 copies for me for $400 dollars. I was on cloud nine! When the books came back, they were not printed very well, but I didn’t care. I was so happy to see something I wrote in print that a little seed of hope was planted in my mind. Maybe I could write for Muslims and give them something they would enjoy. But then I hit a brick wall.

I thought the Muslims around me, especially the activist types, would be happy to get something for their kids to read that had some kind of an Islamic flavor. I thought the youth would be enthused at the same time. Neither happened. I offered my book to everyone I knew for a mere $3. No takers. Then I lowered the price to $2. I think I sold two copies. By the end of the week, I was just giving the books away to anyone who would take them. To this day, not a single person ever told me they read it and/or enjoyed it. That was almost fifteen years ago. But I didn’t give up. I never felt there was anything wrong with my writing style. Heck, I liked reading my own writing. So I had to look for other explanations. I’ll get back to that in a moment.

If a Muslim child gets no exposure to Islam in their hours of reading pleasure, then Islam never enters his imagination

The following year I paid the same brother to publish a small hadith book I assembled. Then I started work on another book I called: “How to Tell Others About Islam.” I thought that these non-fiction titles would have more appeal. I certainly didn’t want to give up on my fiction writing, though. I even entertained the fantasy that one day I might be able to make a living through writing. I’m still nowhere near that dream, even after finishing 25 books and even a new Qur’an translation! Well, I had the same problem with the non-fiction titles: I had to beg people to take my books. Enter more speculation on the eternal question: why don’t Muslims buy books?

Then I moved to New York in 1995. I got a job in an Islamic school there, and found that the kids were bored with their history lessons, so I began to use my imagination to weave tales that would connect them to the subject at hand. One day I started a yarn about one “Ahmad Jones” and how he discovered spectacular archeological treasures. I guess I got carried away and turned it into a full-fledged tale that was so compelling that I sat down one week during a vacation and wrote a whole short novel about him. I realized that I didn’t like using Jones as his last name, so I changed it to “Ahmad Deen” (after one of my best student’s last name). Thus, Ahmad Deen and the Curse of the Aztec Warrior was born. I found a local Korean printer to print 300 copies for about $700 and I began to offer it to people. The kids in the school loved it. I was so happy. I mean, there really was nothing with an Islamic flavor for them to read even by then, and to hear their excitement and love of the book confirmed to me that more was needed.

In a mad rush I did a longer Ahmad Deen book, The Jinn at Shaolin, a Layla Deen book, and then I rewrote an existing story, Isabella, in better English with a more streamlined plot. I printed them all inexpensively at the local Korean shop and then started renting booth space at Muslim conventions to try to get them “out there.” For anyone who has ever tried to sell something in a convention bazaar, may Allah reward him or her for their patience. The Muslim consumer is a hard-to-convince shopper. Beyond the automatic skepticism that a Muslim seems to be born with, the seeming need to haggle for every little dime is unnerving at best and downright frustrating at worst. I explained to one brother who was trying to haggle a price below my cost that I would wind up paying him to take the book. He apologized and said it was “sunnah” to haggle every price. He wound up getting the book at below my cost, simply because I was so disgusted at that moment I just wanted to give everything away and go home!

I expended so much effort in the mid 90s in promoting these books and lost so much money doing so, that I wondered how Muslims could ever hope to have a voice of their own in the bookstores of America. I actually had many parents discouraging their children from purchasing books from my table with reasons that ranged from “don’t you want a candy instead” to “why buy a book – you read it only once and throw it away.” I realized then that many of these parents, who came from other countries, never really grew up reading fiction themselves. That was my eureka moment, and I steeled myself for the long struggle. The immigrant parents just didn’t know the value of Islamic fiction because they didn’t experience the joy a young person has when immersed in a great adventure story or an emotional hardship tale or an endearing family drama or the narrative of a heroic journey. In the West, youth literature is everywhere. Perhaps the current generation which has been exposed to this phenomenon will be more open to Islamic fiction for their own children!

It wasn’t all bad news at the conventions, however. Some people did buy my fiction books, and after some years, enough people came back and complimented my writing to give me hope that even immigrant Muslims really did want better reading choices for their children. Well, I got sidetracked by non-fiction again, and for the last ten years I’ve been concentrating on textbooks and such; but soon I want to go back permanently into fiction and literature – my first love.

When I go into Barnes & Noble or Borders and see the youth section, I can’t help but think that any kid would want to become a reader after seeing all the diverse offerings there. As you know, reading helps to form our attitudes about the world, so the content is as important as the cover. When you look at what the young adult and pre-teen books are about, you find book after book about magic, witchcraft, dating, “troubled” youth, and much more of these un-Islamic themes. To this day, I’m shocked by how oblivious some of our Muslim parents are when it comes to what their children are reading.

I know of so many Muslim authors who have as much passion about providing good literature for our youth as I do. Each of them is struggling – unless they compromise with the non-Muslim world and remove religion from the books and make them mere “ethnic” tales. Islamic fiction should be a reflection of the dual world that Muslim youth are growing up in. They should see something of themselves in the narratives, even as the presence of the non-Muslim world is acknowledged. Too many youth are being raised on a diet of literature that has no mention of Islam or Muslim values, and that contains ideas that are abhorrent to a genuinely Islamic perspective.

Each parent has to decide what he or she wants for their child. Our children can be assimilated and completely “accepted” by the non-Muslim world — finding their place as exotic ethnics on the cheerleading squad, mascots of diversity and inclusion, or end up as just another nitwit sitting at the bar. At the other extreme, do you want your kid to be ghettoized and cut off from the wider world – embittered, angry, and without imagination? Or do you have no real plan and just let the winds blow your child where they may? Yeah, Islam is the truth, you say, but I want my kid to be rich and successful, even as they carry on my cherished ethnic traditions. In the end, you may not get any of those things from them.

The youth are a work in progress. The young mind absorbs information, experiments with different identities, and yields to compelling influences. If a Muslim child gets no exposure to Islam in their hours of reading pleasure, then Islam never enters his imagination. Instead, non-Muslim values and ideas will occupy that space. Ponder upon these things and then support your children by supporting Muslim fiction. How do you do this? That’s simple: buy fiction books written by Muslim authors and slip them on your kid’s bookshelf! Let Islam have a part in their imagination and you plant a seed of the possible that may produce some truly satisfying results in later generations. 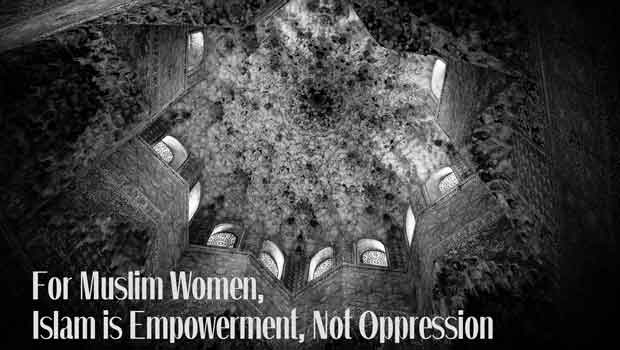 For Muslim Women, Islam is Empowerment, Not Oppression