Even before Islam was introduced to Yathrib, Rumaysa was known for her excellent character, the power of her intellect and her independent attitude of mind. She was known by various names including Rumaysa and Ghumaysa, but these were possibly nickna mes. One historian says that her real name was Sahlah but later she was popularly known as Umm Sulaym.

Umm Sulaym was first married to Malik ibn an-Nadr and her son by this marriage was the famous Anas ibn Malik, one of the great companions of the Prophet.

Umm Sulaym was one of the first women of Yathrib to accept Islam. She was influenced by the refined, dedicated and persuasive Musab ibn Umayr who was sent out as the first missionary or ambassador of Islam by the noble Prophet. This was after the first pl edge of Aqabah. Twelve men of Yathrib had gone to Aqabah on the outskirts of Makkah to pledge loyalty to the Prophet. This was the first major break through for the mission of the Prophet for many years.

Umm Sulaym’s decision to accept Islam was made without the knowledge or consent of her husband, Malik ibn an-Nadr. He was absent from Yathrib at the time and when he returned he felt some change had come over his household and asked his wife: “Have you be en rejuvenated?” “No,” she said, “but I (now) believe in this man (meaning the Prophet Muhammad).”

Malik was not pleased especially when his wife went on to announce her acceptance of Islam in public and instruct her son Anas in the teachings and practice of the new faith. She taught him to say la ilaha ilia Allah and Ash hadu anna Muhammada-r Rasulull ah. The young Anas repeated this simple but profound declaration of faith clearly and emphatically.

Umm Sulaym’s husband was now furious. He shouted at her: “Don’t corrupt my son.” “I am not corrupting him ,” she replied firmly.

Her husband then left the house and it is reported that he was set upon by an enemy of his and was killed. The news shocked but apparently did not upset Umm Sulaym greatly. She remained devoted to her son Anas and was concerned about his. proper upbringin g. She is even reported to have said that she would not marry again unless Anas approved.

When it was known that Umm Sulaym had become a widow, one man, Zayd ibn Sahl, known as Abu Talhah, resolved to become engaged to her before anyone else did. He was rather confident that Umm Sulaym would not pass him over for another. He was after all a strong and virile person who was quite rich and who possessed an imposing house that was much admired. He was an accomplished horseman and a skilful archer and , moreover, he belonged to the same clan as Umm Sulaym, the Banu Najjar.

Abu Talhah proceeded to Umm Sulaym’s house. On the way he recalled that she had been influenced by the preaching of Musab ibn Umayr and had become a Muslim. “So what?” he said to himself. “Was not her husband who died a firm adherent of the old religion and was he not opposed to Muhammad and his mission?”

Abu Talhah reached Umm Sulaym’s house. He asked and was given permission to enter. Her son Anas was present. Abu Talhah explained why he had come and asked for her hand in marriage.

“A man like you, Abu Talhah ,” she said, “is not (easily) turned away. But I shall never marry you while you are a kafir, an unbeliever.” Abu Talhah thought she was trying to put him off and that perhaps she had already preferred someone wealthier and more influential. He said to her:

“What is it that really prevents you from accepting me, Umm Sulaym? Is it the yellow and the white metals (gold and silver)?”

“Gold and silver?” she asked somewhat taken aback and in a slightly censuring tone. “Yes,” he said. “I swear to you, Abu Talhah, and I swear to God and His Messenger that if you accept Islam, I shall be pleased to accept you as a husband, without any gold or silver. I shall consider your acceptance of Islam as my mahr.”

Abu Talhah understood well the implications of her words. His mind turned to the idol he had made from wood and on which he lavished great attention in the same way that important men of his tribe venerated and cared for their personal idols. The opportunity was right for Umm Sulaym to stress the futility of such idol worship and she went on: “Don’t you know Abu Talhah, that the god you worship besides Allah grew from the earth?” “That’s true,” he said.

“Don’t you feel stupid while worshipping part of a tree while you use the rest of it for fuel to bake bread or warm yourself? (If you should give up these foolish beliefs and practices) and become a Muslim, Abu Talhah, I shall be pleased to accept you as a husband and I would not want from you any sadaqah apart from your acceptance of Islam.”

“Who shall instruct me in Islam?” asked Abu Talhah. “I shall,” Umm Sulaym replied. “How?”

“Utter the declaration of truth and testify that there is no god but Allah and that Muhammad is the Messenger of Allah. Then go to your house, destroy your idol and throw it away.”

Abu Talhah left and reflected deeply on what Umm Sulaym had said. He came back to her beaming with happiness.

Umm Sulaym and Abu Talhah were married. Anas, her son, was pleased and the Muslims would say: “We have never yet heard of a mahr that was more valuable and precious than that of Umm Sulaym for she made Islam her mahr.”

Umm Sulaym was pleased and delighted with her new husband who placed his unique energies and talents in the service of Islam. He was one of the seventy three men who swore allegiance to the Prophet at the second Pledge of Aqabah. With him, according to on e report, was his wife Umm Sulaym. Two other women, the celebrated Nusaybah bint Kab and Asma bint Amr witnessed Aqabah and took the oath of allegiance to the Prophet.

Abu Talhah was devoted to the Prophet and took enormous delight in simply looking at him and listening to the sweetness of his speech. He participated in all the major military campaigns. He lived a very ascetic life and was known to fast for long periods at a time. It is said that he had a fantastic orchard in Madinah with date palms and grapes and running water. One day while he was performing Salat in the shade of the trees, a beautiful bird with brightly colored plumage flew in front of him. He became engrossed in the scene and forgot how many rakats he had prayed. Two? Three? When he completed the Prayer he went to the Prophet and described how he had been distracted. In the end, he said: “Bear witness, Messenger of Allah, that I hand over this orcha rd as a charity for the sake of Allah, the Exalted.”

Abu Talhah and Umm Sulaym had an exemplary Muslim family life, devoted to the Prophet and the service of Muslims and Islam. The Prophet used to visit their home. Sometimes when the time of Prayer came, he would pray on a mat provided by Umm Sulaym. Someti mes also he would have a siesta in their house and, as he slept, she would wipe the perspiration from his forehead. Once when the Prophet awoke from his siesta, he asked: “Umm Sulaym, what are you doing?” “I am taking these (drops of perspiration) as a ba rakah (blessing) which comes from you ,” she replied.

At another time, the Prophet went to their house and Umm Sulaym offered him dates and butterfat but he did not have any of it because he was fasting. Occasionally, she would send her son Anas with bags of dates to his house.

It was noticed that the Prophet, peace be on him, had a special compassion for Umm Sulaym and her family and when asked about it, he replied: “Her brother was killed beside me.”

Umm Sulaym herself was noted for her great courage and bravery. During the Battle of Uhud, she carried a dagger in the folds of her dress. She gave water to and tended the wounded and she made attempts to defend the Prophet when the tide of battle was tur ning against him. At the Battle of Khandaq, the Prophet saw her carrying a dagger and he asked her what she was doing with it. She said: “It is to fight those who desert.”

“May God grant you satisfaction in that,” replied the Prophet. In the face of adversity, Umm Sulaym displayed a unique calmness and strength. One of her young sons (Umayr) fell sick and died while her husband was away looking after his orchards. She bathed the child and wrapped him in shrouds. She told others at her home that they should not inform Abu Talhah because she herself wanted to tell him.

Umm Sulaym had another son whose name was Abdullah. A few days after she gave birth, she sent Anas with the baby and a bag of dates to the Prophet. The Prophet placed the baby on his lap. He crushed the dates in his mouth and put some in the baby’s mouth. The baby sucked the dates with relish and the Prophet said: “The Ansar are only fond of dates.”

Abdullah eventually grew up and had seven children all of whom memorized the Quran.

She was devoted to the Prophet and dedicated her son Anas to his service. She took the responsibility of educating her children and she played an active part in public life, sharing with the other Muslims the hardships and the joys of building a community and living for the pleasure of God. 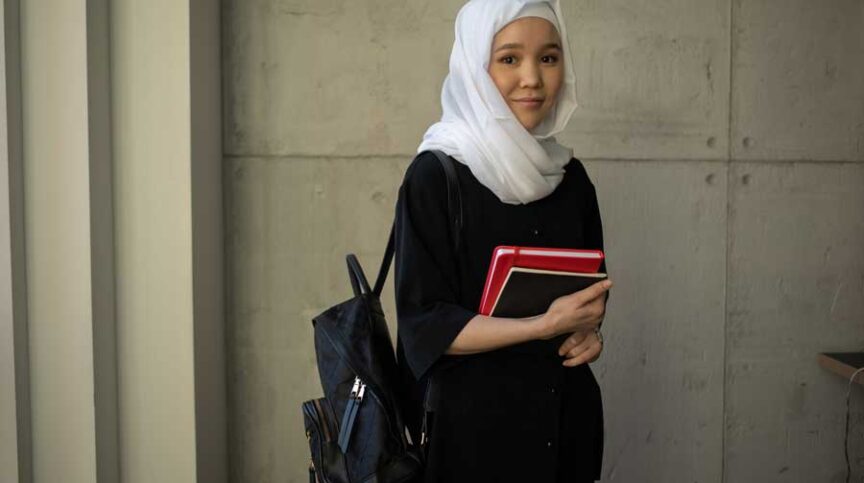 Embracing Authenticity as a Muslim Woman