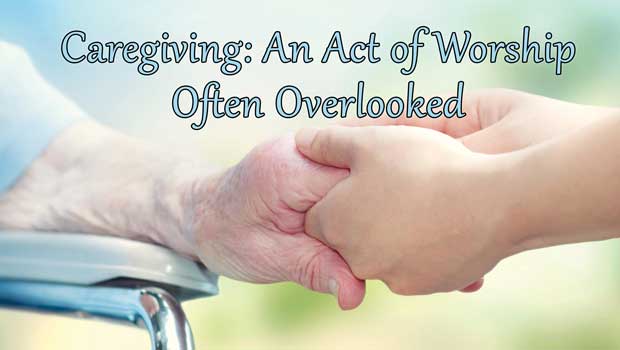 “It is not righteousness that you turn your faces toward the east or the west, but righteous is he who believes in Allah and the Last Day and the Angels and the Book and the Prophets, and gives his wealth in spite of his love [for it] to his relatives and the orphans and the needy and the wayfarer and the beggars, and for freeing those in bondage; and who establish the prayer and pay the poor-due; and those who fulfill their promise when they make it, and the patient in suffering and hardship, and in times of peril; it is those who are true and righteous” ( Quran, 2:177).

Consider the situation of a Muslim who is caring for a sick relative or an elderly parent. The afflicted family member cannot bathe or eat on their own, they cannot dress themselves, or walk to the bathroom to answer the call of nature. The caregiver must be with them each day, tending to their every need diligently, with very little time for themselves to engage in other activities. They might not be getting enough sleep and often feel too exhausted to offer voluntary prayers or fasting. Is such a person missing out on performing acts of worship that will benefit them in the Hereafter? Are they neglecting their duties to their Lord?

Being a caregiver is part of the innate nature of man. Regardless of gender, locality, social status, or religious background, human beings are creatures that thrive on nurturing relationships. Humans have both the need to feel protected and loved and the desire to reciprocate these emotional needs on both a spiritual and physical level. In Islam, every action that is done with the intention of pleasing the Creator is considered an act of worship. Thus, social interactions that are carried out in accordance with the teachings of the Quran and prophetic traditions naturally fall into this category.

Allah says in the Quran, “And they have been commanded no more than this: to worship Allah, offering Him sincere devotion, being true [in faith]; to establish regular prayer, and to practice regular charity; and that is the religion right and straight” (98:8). We should note here that charity encompasses much more than giving money. The Prophet (pbuh) said, “A kind word is charity, and every step that a person takes for prayer is a charity; if you remove obstacles in the road it is a charity” (Ahmad). Certainly, caregiving is an essential and profound charity.

Benefits to the Giver

Tristen Inagaki and Edward Orehek, both assistant professors in the Department of Psychology at the University of Pittsburgh, write about the benefits of caring for others: “People thrive when they experience close social bonds and suffer when they lack social ties. In particular, social connections foster a sense of social support—the perception or experience of being loved and cared for by others, esteemed and valued, and part of a social network of mutual assistance and obligations (Wills, 1991) —which is important for functioning in daily life (Lakey & Orehek, 2011).”

The pillars of Islam are the very foundations of faith through submission, and one of those pillars has to do with caring for others. Like salat (prayer), sawm (fasting during the month of Ramadan), and hajj (the pilgrimage to Makkah), zakat (obligatory charity) is regarded as a pillar of the religion and an act of worship. The purpose of zakat is not only to purify the wealth of the person giving, but also to aid the less fortunate. While the other pillars of Islam serve the individual, offering zakat impacts the entire Muslim community, and society in general. Muslims are obligated to care for the needy and fulfilling this duty is a major and necessary part of worship.

Everyone Is a Caregiver

There are countless examples in both the Quran and the Sunnah that demonstrate that caring for any living being is regarded as an act of worship. Every single person is a potential caregiver and must fulfill the role at one point or another. Even caring for and protecting the earth and its resources is a form of caregiving. Tending to a sick or wounded animal, nursing a child, providing for one’s family, taking care of an elder — these all demonstrate the human capacity and willingness to care and nurture and provide for the needs of others. As far back as Adam and Eve, parents have helped one another in nurturing their offspring, raising them until they are independent adults and then providing them support even beyond their young adulthood. They teach them the skills they need to be on their own, just like a bird shows its young how to fly, or a lion teaches its cub how to hunt. Older siblings take care of younger siblings and help with daily chores. Aunts, uncles, cousins, even neighbors and teachers, all form a support network of cultivation for the youth, preparing them for the responsibilities of adulthood.

Once this child is grown up, then they must take care of themselves, start a family of their own, and possibly bear children, and the cycle begins all over again. When parents grow older and need help, their children become their caregivers. Allah says in the Quran, “And your Lord has decreed that you worship none but Him, and to parents be good. Whether one or both of them reach old age [while] with you, say not to them a word of contempt and do not repel them, but speak to them a noble word” (17: 23). This system of care and compassion is encouraged in Islam, and Allah, more than once in the Quran, commands men and women to honor their parents, at times citing the parents’ sacrifices of love, care, and commitment to their children.

Not upholding this trust can result in earning the wrath of Allah. An example of this is the narration about a woman who owned a cat and neither fed the animal nor allowed it to go out in search of food and drink. The cat’s death resulted in her being condemned to the Hellfire (Bukhari and Muslim). In both Bukhari and Muslim, it is also narrated that the Prophet, peace be upon him, said, “There is no servant to whom Allah has entrusted the care of people, and he dies neglecting his flock, but Allah will forbid Paradise to him.”

Allah Is with Those Who Are in Need

Now imagine the scenario of the caregiver who will meet his Lord, after the time spent on earth offering his or her time, energy, and sincere efforts to care for the needs of others. They will humbly ask Allah for mercy and forgiveness for not offering more voluntary prayers or fasting. However, when they give the reasons for that, they will say: “My Lord, one of your servants was sick, and I took care of them; one of your servants needed food, and so I fed him; one of your servants was thirsty, and I gave him drink.” What will the caregiver’s situation be before Allah SWT? The bounteous reward that such a person has in store is unfathomable.

Aside from the recompense in the Hereafter, there are worldly benefits to caregiving. Anas ibn Malik reported that the Messenger of Allah, peace be upon him, said, “Whoever is pleased to have his provision expanded and his life span extended, then he should keep good relations with his family” (Bukhari and Muslim). Keeping good relations with family encompasses good treatment and caring for their needs. Science, again, seems to agree with this prophetic guidance. In an article in Time Magazine entitled, “Be Nice, Because People Who Care for Others Live Longer,” the author mentions that, “a recent study published in the journal, Evolution and Human Behavior, found that people who occasionally watched and cared for others lived longer than people who didn’t (Sifferlin, 2016).” Likewise, an article by Melissa Willets in Parents magazine, “Good News, Moms-of-Many! You May Live Longer,” cites two new studies that propose that mothers who bear multiple children and raise large families, with the support of a social network, may live longer.

As mentioned before, caregiving not only impacts people on an individual level, but it can also serve as a catalyst for social change. If the instinct of humans is to protect and nurture, seeing another creature suffering should trigger a caring and compassionate response. As the caretakers of the earth, the responsibility of mankind Is to maintain balance and justice. Thus, caring for others is also the driving force behind social movements. Public outrage or a massive public response happens when people in a society witness a wrongdoing or natural disaster which causes anguish. This is the natural inclination to care for fellow human beings, instilled in us by the Most Merciful, Himself. Abdullah ibn Amr reported that Prophet Muhammad, peace be upon him, said, “Those who are merciful will be shown mercy by the Most Merciful. Be merciful to those on the earth and the One in the heavens will have mercy upon you” (Tirmidhi). 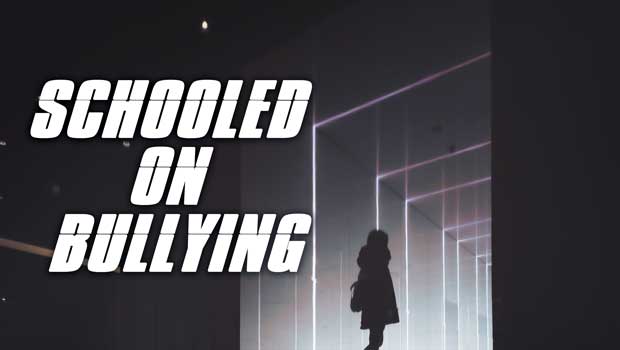