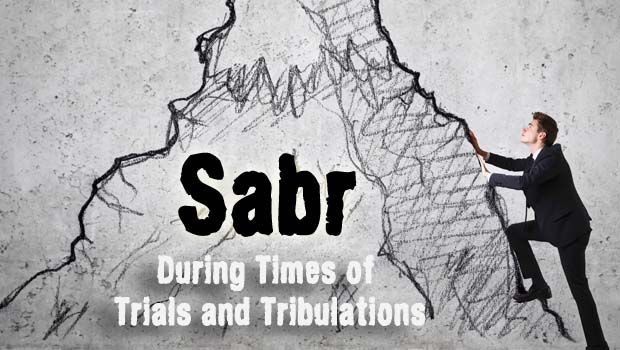 These days Muslims are being tested, from being mocked at to intrusions of surveillance, the threat of expulsion, and even vile remarks towards Allah SWT, The Creator and Sustainer of all that exists. In these tough times, it is faith in Allah SWT, sabr (patience and perseverance) and tawakkul (trust in and reliance on Him SWT) that bring about calmness amidst the chaos and turmoil, bestowing peace and tranquility to the hearts. Moreover, sabr provides illumination – light, guidance, and clarity – in moments of darkness, as Rasoolullah (peace be upon him) said, “… patience is illumination.”

The example of a believer is that of a fresh tender plant; from whatever direction the wind comes, it bends it, but when the wind becomes quiet, it becomes straight again.

Often sabr is translated as patience or withstanding with patience whatever difficulty has befallen a person. One may think that it is a passive state of accepting the tests and trials of this dunya, including those inflicting injustice or oppression. But another meaning of sabr is “tasabbur” or perseverance. This is the ability to continue on in spite of difficulties, with steadfastness and unwavering purpose. So sabr is not fatalistic resignation, a passive acquiescence to a situation or circumstances. Both aspects of sabr, patience and perseverance, are required when going through trials and tribulations. And let us be reminded that Allah SWT is with those who have sabr: “And be patient and persevering, for Allah is with those who patiently persevere” (Quran 8:46). For sure, Allah SWT tests the believers throughout their lives, from childhood to old age. Our status in this life can change instantly, from richness to poverty, ease to hardship, joy to sadness, health to sickness, security to fear – life has ups and downs and phases of good or ill fortune.

He SWT tested each and every one of the Prophets and He likewise tests each one of us. He tests us as individuals, as families, as communities, and as nations. And certainly He SWT tests the Muslim ummah. As He SWT says in the Quran: “…Do people think that they will be left alone because they say, ‘We believe,’ and will not be tested.” More importantly, in each of these tests the believers are measured as to how truthful they are to their belief. Allah SWT says in the very next verse: “And We indeed tested those who were before them. And Allah will certainly make known those who are true, and will certainly make known those who are liars” (Quran 29:1-3).

Rasoolullah (pbuh) endured all that persecution with sabr and tawakkul in Allah SWT, with grace, tolerance, forbearance, self-control, and absolute resolve. He never gave up.

So these difficult times we are enduring are part of the test. Rather than shaving one’s beard or taking off the hijab, Muslims should feel honored to visibly represent Islam, a declaration that fear will not extinguish faith! When the genocide took place in Bosnia two decades ago, many Bosnians did not even know how to perform wudhu; but when they were threatened with oppression or even slaughter just because they had a Muslim name, they stood fortified in their faith, proud to be Muslim. Indeed, we must never think that anyone will enter Jannah without being tested. Allah SWT says: “Or do you think that you will enter Paradise without such [trials] as came to those who passed away before you? They were afflicted with severe poverty and ailments and were so shaken that even the Messenger and those who believed along with him said, ‘When [will come] the Help of Allah?’ Yes! Certainly, the Help of Allah is near!” (Quran 2:214).

In Islam, there are three requisite ways in which we must strive to practice sabr. Indeed, in our circumstances today, sabr becomes waajib or compulsory.

First: Sabr in handling challenges and tests from Allah

Allah gives the most striking examples of sabr in the lives of the Prophets, as they showed patience and perseverance in situations that tested the very mettle of their faith. A few examples are Prophet Yusuf (pbuh), as a child, being thrown into a well and abandoned by his own brothers; Prophet Yunus (pbuh) in the belly of a whale for three days; Prophet Ayoub (pbuh) tested with loss of health, wealth, and family. And of course all of the prophets were tested and demonstrated great sabr, but there are five who are referred to as “ulul azm,” those with exceptional azm, an unfaltering and unwavering resoluteness of belief and action. These five are Prophets Noah, Abraham, Moses, Jesus, and Muhammad, peace be upon all of them. They never deviated from their devotion to Allah, and remained resolute only for Allah SWT’s pleasure.

In fact, Allah tests most those that He loves. Rasoolullah (pubh) said: “The Prophets, then the righteous, then those nearer to perfection – a man will be tested with regards to religion. Hence if he is firm in his religion his test will increase, and if he is weak in his religion it is lightened. And a servant will continue to have tests until he walks this earth without any sins.” Of course, both good and ill fortune can be a test. Yet we are assured that every test and trial brings good as long as we demonstrate gratitude in times of ease and sabr in times of hardship. Rasoolullah (pbuh) describes this: “Strange are the ways of a believer for there is good in every affair of his, and this is not the case with anyone else except in the case of a believer; for if he has an occasion to feel delight, he thanks [Allah SWT], thus there is a good for him in it; and if he experiences trouble and has sabr, there is a good for him in it.”

Today, as we are bombarded with bigotry, rejection, hatred, and even physical abuse, we must not give up, but be steadfast and persevere. This is what causes our iman to increase in Allah SWT. We are reminded of what Prophet Musa (pbuh) said to the Bani Israil: “Moses said to his people, ‘Seek help in Allah and be patient. Indeed, the earth belongs to Allah. He causes to inherit it whom He wills of His servants. And the [best] outcome is for the righteous” (Quran 7:128).

Throughout our daily lives, especially when performing our ibaadaat (acts of worship), we are taught to be patient and to be steadfast in obeying Allah’s orders. The obedience of a Muslim towards Allah SWT and his Messenger (pbuh) must be based on and backed by a strong character of sabr. This is because without patience and perseverance, it is hard for us to consistently perform all our religious obligations with complete sincerity and devotion. With regards to exercising patience, Allah SWT says, “And await in patience the command of your Lord; for verily you are in Our sight. And celebrate the praises of your Lord when you arise” (Quran 52:48).

Indeed, patience and perseverance are required because our salaah, zakaah, and fasting, our zhikr of Allah SWT, or wearing the Muslim-identifying hijab or a beard, are not always easy and convenient. They require us to have sabr in fulfilling them. Sometimes they become a test for us, yet we have to try our best to fulfill them, for none but Allah SWT. Unfortunately there are those who reject Allah SWT spend their wealth to prevent those who believe from worshipping Allah SWT. But patience and perseverance is required to withstand such onslaughts. Allah SWT says, “Indeed, those who disbelieve spend their wealth to avert [people] from the way of Allah. So they will spend it; then it will be for them [a source of] regret; then they will be overcome. And those who have disbelieved – unto Hell they will be gathered” (Quran 8:36).

Sabr is required to hold oneself accountable for all actions, and that means, with regard to Allah SWT’s prohibitions, practicing restraint and holding back from all that is forbidden, disobedient, or harmful to one’s character or religious state and standing in the eyes of Allah. We practice patience in the face of annoyance or frustration so that we don’t engage in loss of temper or unfair criticism. When we experience sorrow or suffering or misfortune, we are patient, persevering with faith and guarding against bitter complaint or hopelessness. By practicing sabr in daily living, at times when things just don’t go right or as planned, we fortify our capacity to refrain from the haram, those things that are explicitly forbidden such as fornication and adultery, usury, using or consuming intoxicants, backbiting or suspicion, exploitation or fraud in business practices and dealings, and all other forbidden or unlawful things as specified by Allah SWT. We should remember that Allah is the All-Seeing and All-Knowing. We are also reminded of His promises of reward if we exercise sabr in refraining from His prohibitions.

Some Methods for Acquiring Sabr

In these troubling times, increasing our sabr is essential. Here are a few ways to do that:

Rasoolullah (pbuh) endured all that persecution with sabr and tawakkul in Allah SWT, with grace, tolerance, forbearance, self-control, and absolute resolve. He never gave up. In fact, every time they endured persecutions, he and his companions became stronger. And many who engaged in harassing and oppressing the Muslims, themselves, in time, became upright Muslims, devoted to and defending Islam. One only need to look at the example of Abu Sufyan who was the leader of the disbelievers. In the end, he accepted Islam, and from his generation came the Umayyad Dynasty. And let us never lose sight of the fact that because of the patience and perseverance of Rasoolullah, the world today is filled with 1.8 billion Muslims, found in every nook and corner of the globe, just as Rasoolullah (pbuh) predicted: “This message will reach to wherever the night and day have reached. Allah shall not leave any home built by clay or stones or by animal skin [tent] except Allah will make this religion to enter it, to give honor to those who are honorable and to disgrace those who are disgraceful. Allah shall give honor to Islam, and Allah shall give dishonor to unbelief” (Musnad Ahmad).

Let me end with an inspiring statement from Rasoolullah (pbuh): “The example of a believer is that of a fresh tender plant; from whatever direction the wind comes, it bends it, but when the wind becomes quiet, it becomes straight again. Similarly, a believer is afflicted with calamities. And an impious wicked person is like a pine tree which keeps hard and straight till Allah cuts it down when He wishes.” We can understand from this that the believer endures all difficulties with sabr until Allah provides relief. The believer can be blown about, shoved off-center, buckled, knotted up, or wrenched by the windy storms of ignorance – its hatred, bigotry, and hostility. But, as a believer, he or she again and again will straighten up, stand upright and tall in dignity, and be ready to move ahead with resolve and vigor.

O Allah SWT! Guide our people to the Straight Path and protect us all! Those among us whose imaan is weak, let them be strengthened through these trials. Help us to remain truthful to our faith. Help us to speak truth. And guide the Muslim ummah to ever greater righteousness, integrity, and justness as we sustain ourselves and strengthen ourselves through sabr and tawakkul. Ameen.