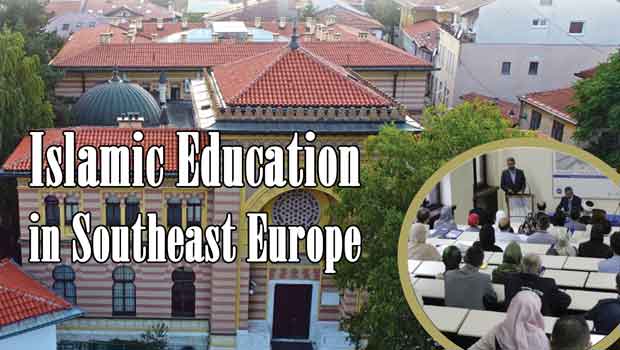 Sarajevo, the capital of Bosnia, is home to the Faculty of Islamic Studies, a part of the University of Sarajevo. The Faculty emerged out of the Islamic School for Theology and Sharia Law, established under the Austria-Hungary administration in the late 19th century. Although, the Austro-Hungarian empire was predominantly Catholic, it granted certain religious and cultural autonomy to the Muslims in Bosnia, and the Sharia school was approved and even partly financed by Austrian authorities. The building was designed by leading Austrian architects of the time. The result was an attractive and colorful building with elements of the Moorish style (the Islamic architecture of Northern Africa and parts of Spain). After WWI, when Bosnia was incorporated into the Yugoslav kingdom, the faculty was called the School of Islamic theology. Then after WWII, Yugoslavia became a communist republic, not very friendly toward religion. So, the school was moved to another building, while the original building was turned into a city museum. Over the time, however, communist Yugoslavia became less antagonistic toward religion, and in 1977 the school was renamed the Islamic Theology Faculty. After the collapse of communism and the Bosnian War in the 1990s, the Faculty returned to its original building, this time under the name Faculty of Islamic Studies. The building had been damaged during the war, so after the conflict ended, the building was repaired with money from international donations. Today, the building looks like it appeared more than a century ago when it was the Sharia school.
The Faculty of Islamic Studies has now become the most significant institution for higher Islamic education in southeast Europe, and equal to other faculties within the University of Sarajevo. In fact, Sarajevo has had a reputation for more than four centuries as a city with prominent Islamic education and science. At certain periods in its history, Sarajevo was home to twelve out of Bosnia’s 70 madrasas, along with other Islamic educational institutions. Today, the existence of the Faculty of Islamic Studies ensures that Sarajevo remains an important name on the international map of Islamic knowledge and academia, especially in the region of the Balkans.

The Faculty of Islamic Studies is not only the oldest institute of its kind in Europe, it is also the continent’s most important department of Islamic higher education and research. The Faculty exemplifies a model of Islamic education that matches European standards of higher education, while staying true to traditional Islamic educational ideals and goals. Those who graduate from the Faculty are equipped to teach Islamic studies, whether at an Islamic school or a state school, and can genuinely be considered both scholars of Islam and European intellectuals.
Bosnian Muslims, as well as the Albanian Muslim community, have for centuries been authentic indigenous European Muslim populations, not yet fully tapped as bridges between Western and Islamic interests. The Faculty fits well within the scope of this versatility.

The Faculty of Islamic Studies attracts students from Bosnia and neighboring countries, and more and more from around the world. After the war, the Faculty started attracting non-Muslim visitors including U.S. ambassadors and diplomats from Turkey, Iran, Britain, the EU, Egypt, Qatar, Russia, and more. The Faculty of Islamic Studies maintains contact and cooperation with Oxford University and Al-Azhar in Cairo.
With the rise of islamophobia on the European continent, the Faculty opened its doors to anyone interested in taking a course on basic Islamic doctrines and principles, along with the history of Islam and the Ottoman period in Bosnia. This special course is offered once a year for a duration of three months. If there is enough interest, the course will be offered in Bosnian as well as in English. There is a growing number of foreigners living in Sarajevo, including journalists, foreign students, tourists, international diplomats and their families, humanitarian workers, UN civil sector staff, and peace activists. Many of them would like to learn about Islam, in addition to local residents who might be interested. Zbigniew Wojdyla is a Polish citizen who lives in Sarajevo because of his work in international relations. In explaining his interest in the introductory course, he noted, “In Poland we have Muslims who are of Tatar origin, so I was familiar with Islamic culture to some extent. Here it’s interesting to learn about domestic Muslims, of Slavic background.”

The Faculty keeps good relations with Catholic, Jewish, and Eastern-Orthodox religious high schools. As Bosnia is home to other religious traditions, the Faculty considers it important to promote good interfaith relations. Ahmed Alibašić is a regular professor at the Faculty and he is also one of the lecturers for the basic introductory course. He is specialized in international politics, diplomacy, and the history of Islamic civilization. He was involved in many public interfaith dialogues. He has stated, “While the solutions found by Bosnian Muslims cannot be simply copied elsewhere, West European Muslims should study their institutions and intellectual legacy – and learn from their recent past that isolation equals destruction.”
Bosnian Muslims are, in a real sense, a bridge between Europe and the world of Islam. The Faculty represents this connection, and can continue to foster greater understanding, not only through its academic courses but also by its commitment to interfaith dialogue and its welcoming of people from all faiths and nationalities to visit and/or partake of its introductory course on Islam. And it will continue to be a first-class institute of higher learning for those who want to pursue specialized scholarship in Islamic studies.

Amir TelibecirovicAuthor Amir Telibechirowich was born and raised in Sarajevo, the capital of Bosnia. He is a journalist for several magazines and electronic media across the ex-Yugoslav area. He works as a tour guide in the Balkan region and is author of a book, “The Siege of Sarajevo, 1992-1996.”