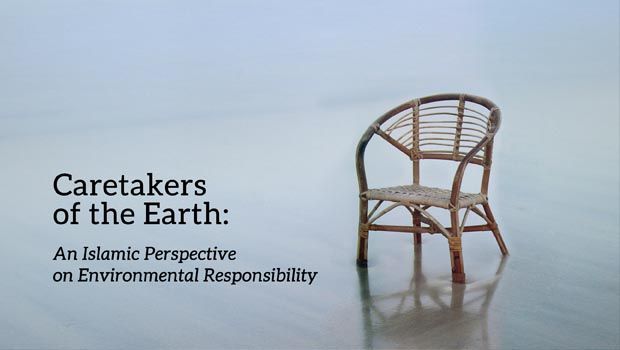 Environmental stewardship is an integral part of Islam. We’re currently experiencing a revival in practice and scholarly engagement in this important area. Ibrahim Abdul-Matin, as one example, has notably developed a contemporary understanding of ecological principles in Islam as antedating modern environmentalism. In a logical and compelling way, he has inspired many to re-engage the subject through his book “Green Deen,” and I will present some of his suggestions at the end of this article.

Quran and hadith contain numerous textual evidences in support of environmental stewardship. The Quran says, “It is He who has appointed you vicegerent on the earth…” (Quran 6:165). And indeed, the Muslim’s character (khulq) is one that is to be inclined to moderation and conservation rather than excess and wastefulness. The role of human beings in general, and Muslims by extension even more so, as caretakers of the environment, is stressed in seven Quranic verses that tie stewardship (khalifa) to the earth (fil ardh). There is a responsibility charged to human beings to carry out this trust (amana). The Prophet (peace be upon him) said, “The world is beautiful and verdant, and verily God, the exalted, has made you His stewards in it, and He sees how you acquit yourselves” (Saheeh Muslim).

Although the earth is created to serve the purposes of man, it should never be degraded in any way – contaminated or immoderately exploited. Its resources are available to humanity, but are to be used in ways that are sustainable and without harmful impact to the environment and the ecological balance. The Quran tells us, “The servants of the Lord of Mercy are those who walk gently upon the earth…” (Quran 25:63). Islamic teachings oppose using resources in excess or in pursuit of an opulent lifestyle; extravagant excess by some typically deprives others of a basic standard of decent and secure living.

There should always be justice (‘adl) in resource distribution. Allah SWT instructs us about the sharing of resources, using the example of the tribe of Thamud: “And let them know that the water [of their wells] is to be divided between them, with each share of water equitably apportioned” (Quran 54:28). Inequitable distribution of water has been a catalyst for conflict in several Muslim-majority countries. Consulting the prophetic example could offer a starting point to inspire solutions. There are no fewer than four hadith that speak to this. The first, transmitted via Abdullah Ibn Abbas, affirms that “humans are co-owners in three things: water, fire and pasture.” Another, relayed in Mishkat al Masabih, warns “No one can refuse [to share] surplus water without sinning against Allah and against man.” Still another, transmitted via Muhmmad al-Bukhari, relays, “There are three types of people whom Allah will not look at on the Day of Judgment, nor will He purify them, and theirs shall be a severe punishment. One of those is a person who possessed superfluous water on a path and withheld it from travelers.”

The fourth hadith, transmitted via Muhammad al-Bukhari, tells the story of the Ruma Well, which during the time of the Prophet was owned by a man who was charging a high price for people to use it. The Prophet said “For anyone who will purchase the Ruma Well and use its water jointly with other Muslims, a wonderful place in the Garden of Eden will be prepared.” The Prophet’s companion Uthman bought the well and made its use free for all people of Medina. Uthman would continue to maintain the well as he ascended to leadership as the third khaliph.

Land Preservation and Sanctuary for Wildlife

The Prophet was also a pioneer when it came to land preservation and providing sanctuary for wildlife. He designated special areas where water, wildlife, and forestry use would be restricted (haram) or left alone altogether (hima). These are precedents for what’s currently referred to as a nature reserve or preserve. The Prophet believed that animals, land, and water were not the possessions of mankind, but rather provisions from Allah to use in moderation and wisdom. The Quran says, “…waste not by excess, for Allah loves not the wasters (Quran 7:31).

In line with protecting wildlife, the Prophet has instructed us that hunting is for valid reasons such as obtaining food or when necessary for the safety of humans, but never for sport or pastime. He mentioned: “If anyone wrongfully kills a sparrow or anything greater, God will question him about it” (An-Nasa’i).”

Recycling and the Balance of Nature

Recycling should be a reflex. In many places it’s as easy as placing non-food remains in the appropriate bin. And where composting is available (which can be anywhere food is grown), most waste can be reused as nutrients to fertilize the soil for further growing of fruits and vegetables. Things that we typically throw in the trash can be re-used in one way or another. Metals, plastics, and glass should not be going to landfills as they can be reused or recycled. The paper that comes from a chopped-down tree is worth far more than a single use.

The balance (mizan) of nature is complex and intricate and must be maintained. And all living things have a symbiotic relationship, and that interdependence should be mutually beneficial. Corrupting the balance of nature has far-reaching consequences. The Quran tells us, “Corruption has appeared on land and sea because of what the hands of humans have wrought, that He may make them taste a part of that which they have done, in order that they may return [to guidance]” (Quran 30:41).

Our industrialized societies emit large amounts of carbon every day. Trees were once able to absorb the lower-level amount of emissions, but the balance (mizan) of greenery to carbon-fueled activity has tipped toward the latter. Carbon dioxide emissions, which account for roughly 80 percent of greenhouse gas emissions in the U.S., come from burning fossil fuels, generating electricity, vehicle fuel emissions, manufacturing, and burning of waste. Exposure to even low levels of carbon dioxide can cause a wide array of health hazards, particularly respiratory complications. The imbalance that humanity has created has also resulted in a warmer atmosphere that catalyzes extreme weather occurrences like hurricanes, floods, heat waves, and droughts.

We should approach the need to reinstate the balance and clean up the environment with urgency but also optimism. We now, more than ever, have access to information, resource optimization, renewable energy, and recycling infrastructure. More and more people feel motivated and the tools are available. Wholesale lifestyle changes aren’t practical as they are not likely to be made, but incremental adoption can provide tremendous benefit.

Abdul-Matin details a number of smart suggestions that can help us change, and address the sources and circumstances surrounding climate change. And we should not forget what Allah SWT tells us: “…truly, Allah does not change the condition of a people until they change what is in themselves…” (Quran 13:11). Abdul-Matin points out that we can change our global narrative from one of scarcity to emphasizing that we have all we need if we use the resources equitably and in moderation. Both organic and halal food can become affordable and readily available when demand sensibilities change and folks refuse to buy unhealthy foods. There are ways to not only eat smarter, but also to build with greater efficiency. Islamic infrastructure, like mosques, can naturally optimize resource efficiency. Mosques in hot-dry climates are optimally built with heavy, thick materials and minimal openings (windows, doors) to keep hot air out. Mosques in hot-humid climates are better served by shade via plants, awnings, and courtyards, as well as good ventilation. And if mosques in cold climates are appropriately weatherized they can optimize energy efficiency by preventing air leakage.

As Muslims we should, naturally, be a community that consumes less, and uses the bounty provided on the earth in ways that are healthier, more efficient, and more equitable. Through this we facilitate more fair access to resources, preservation of public health, and cultivation of local economies. These practices promote social harmony, as well as charity (zakat and sadaqah) by shunning excessive consumption and the disharmony (fitna) that results. Recycle, repurpose, reuse, and reflect on Allah’s bountiful blessings. Look around and observe, in nature and in the environment, the multitude of signs of Allah, and the beautiful interweave of ecosystems and species that make up a oneness of creation, all beholden to the order and sustenance put in place by the creator.