Impact of Media and Social Media on Islam and Muslims

Do you remember what your life was like ten years ago? How you communicated with people? How you received your news? Shared information?  In this past decade our lives have been forever transformed and the power of media, specifically social media, has significantly impacted the world around us.
In the last few months we have seen more than ever just how important social media is, as we watched three of the most powerful dictatorial regimes of the Arab and African world being toppled, organized and facilitated in no small part via social networking sites such as YouTube, Twitter, and Facebook.

Even as those revolutions are changing the Middle-East region, it seems a transformation is also taking place within the Muslim community.  “Social networks and media have definitely changed the spread of Islam and the perception of Muslims in the minds of many,” said author and professor at DeVry University, Suzy Ismail in an email interview. “The impact of Facebook and Twitter in changing entire nations can be seen in the uprisings of the Arab Spring that were largely dependent on social media as a means of communicating and fueling the passions of the people who overthrew their countries’ dictators. The same can be said of Islam’s relation to social media.”

Social media presents a huge opportunity for us to reach out to people who may not know about Islam or Muslims. Thousands of Americans have never met a Muslim but they have access to us through social media

Muslims Under the Media Microscope

In the post 9/11 era, the growth of electronic and, in particular, social media has had a significant impact on the lives of Muslims around the world. Khurram T. Dara, author of the “The Crescent Directive: An Essay on Improving the Image of Islam in America” remarks that “every scandal, controversy, or violent terrorist attack perpetrated by Muslims is put under the microscope.” Dara goes on to say that it doesn’t necessarily mean that the media has been trying to “spin stories” one way or another about Muslims and Islam.  “Of course, you have commentators and networks out there with agendas they want to push, but for the most part the impact the media has had comes in its evolution into a 24/7 industry. Everything is covered, regardless of whether it is quality journalism from reliable sources.”

Suzy Ismail believes that the media has played a crucial role in the way Muslims and Islam have been perceived over the years. “It would be hard for anyone to say that they have not ‘heard’ of Islam with the amount of coverage that our deen has received in recent years through so many different media outlets. However, because of media filters and biased reporting or media coverage, it’s impossible to control the presentation of the deen to those who may not be familiar with the concepts and tenets of Islam.” Ismail continued, stating that especially since 9/11 “Islam and Muslims have been both vilified and simultaneously victimized. There seems to be two extreme reactions to the deen itself. One is sincere curiosity and interest that motivates education and the other is blind hatred and misunderstanding that leads to scapegoating and stereotyping.”

Being constantly in the media has been both a blessing and curse for Muslims and Islam. Due to the spike in media’s coverage of Islam in recent years it has “definitely increased general awareness of our faith,” said ICNA IT Department Content Manager, Rida Bint Fozi. “The portrayal varies across news outlets, but I think it’s great that Islam remains a hot topic in the media and people are curious and ask questions. It gives us the opportunity to answer them.”

However, it also means often “having to hear a whole lot of nonsense about sharia and the threat of Muslims,” says Dara. “These days the media is a sort of ‘eye in the sky,’ able to scrutinize any and all actions. The best way to counter some of the negative coverage would be to prevent these types of situations from occurring.  We can use the media to our advantage if Muslims are the ones out there tipping off law enforcement about any sort of radicalism they see, or if Muslims are the ones on the frontlines stopping homegrown terrorists.”

As  Muslims demonstrate their commitment and positive contribution to American society, “the media will (eventually) cover it, and if not, the people who have actually gotten to know Muslims will discredit media sources which report negatively about Muslims,” say Dara.

To counteract the growing anti-Muslim backlash, many Muslims, especially the youth, have started using   media sites to create “virtual” communities where they are able to re-define themselves by coming together to debate pressing issues, connect with individuals in similar situations, ask questions and find answers. Social media has opened the “flood gates,” says Dara.  Social media allows “anyone [to] be a reporter or commentator. All kinds of views can be expressed.” This phenomenon has become a vital tool for Muslims to use to dispel negative stereotypes and misinformed notions about Islam.

In the past, seeking knowledge about Islam was mainly restricted to the Masjids, educational institutions, and learning from imams and sheikhs. These traditional learning opportunities remain intact. However, now Muslims are also able to learn, question, teach, and network through social networking sites. “There are more avenues by which to learn about Islam. The Internet has given the public access to all kinds of information and made Islamic literature so much more accessible,” said Fozi. On YouTube, for example, you can listen to a lecture in any language you want, whenever you want. Blogging sites such MuslimMatters.org and SuhaibWebb.com have become extremely popular with both Muslims and non-Muslims as a way to gain information and learn about Islam.

Twitter and Facebook, though, have undoubtedly been the two networking sites with the most active Muslim users. These sites have allowed us to connect with imams and sheiks, political leaders, scholars, and journalists. Furthermore, they have enabled us, at a moment’s notice, to share news and information that matter to us. Nevertheless, Fozi points out that “unfortunately there’s a flipside to being in the limelight. Those who want to cast a negative light on Islam are just as active online and easily perpetuate stereotypes about Muslims through their posts, tweets and videos. It can be overwhelming to contend with, but we need to remember that social media has also empowered us and given us that same platform to express ourselves. We can increase the positive impact of media/social media on the portrayal of Islam by being more active and vocal about our faith.”

The Muslims who are using these platforms are slowly but surely on the frontlines changing the perception of Islam from that of an old-fashioned, authoritarian religion to one people can comprehend and relate to. “Social media presents a huge opportunity for us to reach out to people who may not know about Islam or Muslims. Thousands of Americans have never met a Muslim but they have access to us through social media,” said Fozi. “We have to stop thinking of ourselves as lone individuals that can’t make a difference; get on Twitter and Facebook and YouTube and Instagram and add our voices to the mix.”

Dara adds that if “we [Muslims] focus on our actions, build personal connections with our fellow Americans and display investment in American society, people will sift through the noise. If we develop better reference points for others on Islam, the irrational claims and hateful rhetoric will be washed away to the empty corners of the Internet.” 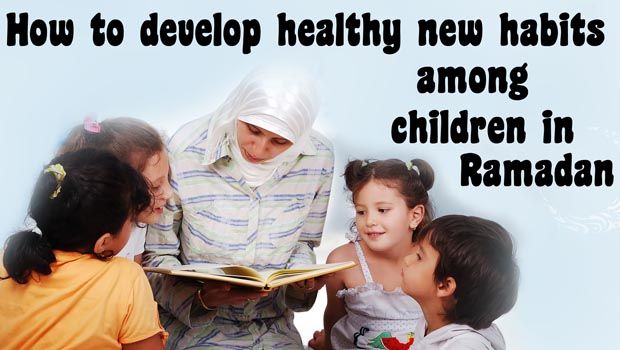 How to Develop Healthy New Habits Among Children in Ramadan