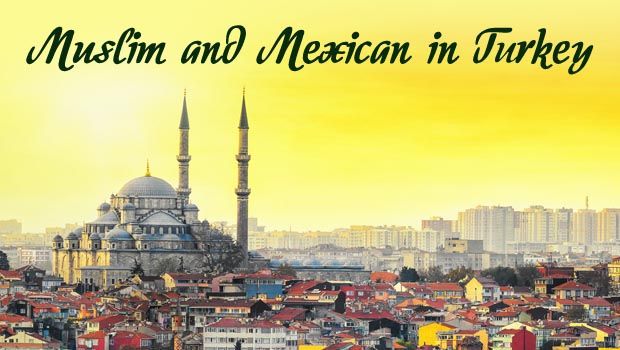 How I came to embrace Islam is a painful memory. However, I am grateful to God for everything that I had to endure to be where I am now. My first encounter with Islam was in 2009, when I met a Turkish Muslim online. I began investigating the religion and learned little by little through our friendship.

The year that changed my life was 2010; it was then that I was diagnosed with lupus erythematosus. The news was difficult to bear. I knew absolutely nothing about this serious disease or its effects. The doctors told me that it is an incurable disease, but subhanAllah, glory be to Allah, for five years I have survived because of the strength of God’s infinite mercy. I consider my illness a blessing because despite the lows and relapses I have had to struggle with since being diagnosed, it has helped me to mature and strengthen my faith.

I have realized that the life of this world is temporary; I am only here to learn and to serve the Most High, and for every pain, for every relapse, for every loss, I know that God will reward me in Jannah, in Paradise, insha’Allah. Perhaps my health will decline more with each passing day, perhaps I will have to make more sacrifices, perhaps I will lose something or someone; Allah knows best, but as a Muslim what I will never lose is my faith and strength in Allah.

In 2011, I traveled to Turkey and heard the Adhan, the call to prayer, for the first time in my life, and I also visited a mosque. Since that first trip, I focused more on Islam because there were things about my Muslim friend that drew my attention. He spoke so highly of the Prophet Muhammad, peace be upon him, and he advised that in order to know more about Islam, I had to learn about the Prophet, read about his life, and love who he was.

That same year I was blessed with the opportunity of becoming a mother, but because of health issues, at five months gestation, on November 17, 2011, my pregnancy was interrupted. While in the operating room the doctors asked if I was Catholic, to which I responded, “No, my religion is Islam.” From that moment I considered myself a Muslim at heart although I had not officially converted.

I was devastated because I understood that now I had to face two losses; not only because my baby died, but the man I considered my partner had abandoned me. I fell into a deep depression. I could not wait to get out of that crisis. I lost everything and even after several months I felt the same. One day in February 2012, I decided to log into Facebook to see what had happened during my absence. Coincidentally, a Muslim friend of mine was also logged on and he asked me how I was doing. Since I needed to get everything off my chest and speak with someone who viewed life differently, through another perspective, another culture, another religion, I vented. He was patient enough to read through everything I posted, until I finished.

His response was, “I will send you something that will help you,” and that is how my first copy of the Qu’ran came to my hands. The first Surah, or chapter, which I read was Al Kauthar, and the verse that opened my eyes was, “Therefore turn in prayer to your Lord and sacrifice,” (108:2). It was after I read those words that I realized why I was going through such painful hardships; I had to sacrifice something that was never meant for me, something that in the end would not make me happy. Allah had already determined my destiny. I began reading more of the Qur’an and exploring Islam until finally, on May 2, 2012, I made the decision to declare my faith in a mosque in Mexico City.

It has been four years since I entered Islam, Allahu akbar – God is Great. My life did not end with the loss of a partner and a child. On the contrary, I became stronger and found my real love, Allah, may He be glorified and exalted, and my true faith. I understood that in order to obtain happiness, one has to sacrifice and leave everything in God’s Hands.

I married that Muslim friend who sent me a copy of the Qur’an, and now I live in Turkey. I arrived here in 2013, and moved to a city called Erzurum, where people are religiously devoted, conservative, and kindhearted. They have helped me to increase my faith. I attend Qur’an class five days a week, where I have learned to recite in Arabic and am attempting to memorize the entire Book. Insha’Allah, God willing, I can return to Mexico to share my knowledge.

I made the decision to memorize the Qur’an because during the time I was living as a Muslim in Mexico, there was a young convert whom I believed to be knowledgeable who would say things that puzzled me. He even tried to teach me things that were contrary to the Sunnah, or Prophetic traditions, and I felt disappointed. That is why I wanted to understand the Arabic and memorize the Qur’an so that no one else could confuse me and also because every Muslim should learn the Holy Qur’an and live in accordance to the Sunnah.

As a convert I felt even more compelled to seek knowledge. If people who are born and raised Muslims can learn, then I can do the same. Being a convert is no excuse for me, just as not having been raised in an Islamic environment is no justification for not seeking knowledge. From the very moment that I declared my Shahada, it became a commitment for me to change my life. I wanted to practice everything that Islam teaches and to always have the thirst for learning more and more about my faith, Alhamdulillah.

Life in Turkey has not been easy since I have had to learn and adjust some of my behavior, but above all live a life in accordance with the Qur’an and the Sunnah. Here in Turkey was where I saw a woman covering her face with a veil for the first time, and men with long beards and tasbih beads making constant dhikr (remembrance of God). Men and women are segregated and the government puts a lot of love and effort into the month of Ramadan.

In Turkey when people discover you are a Muslim from the West, they are filled with surprise and admiration, and at the same time, they offer their love and support. I consider this country the place that opened its doors to me and adopted me, and where I don’t feel excluded or judged because of my religion.

Recently, during a family reunion, someone asked me, “Has your life changed after your conversion? Do you like it? How is your life now?” I simply responded, “Of course my life has changed, and for the better, alhamdulillah. Life in Islam is a new life.”