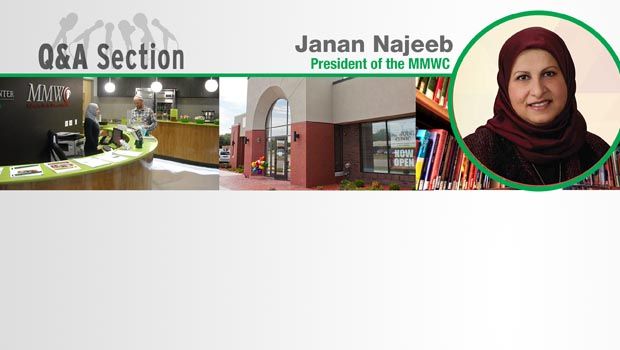 Janan Najeeb is a speaker, educator, business leader, activist, mother, and the force and founder behind a unique non-profit, the Islamic Resource Center (IRC) in Milwaukee, Wisconsin. The lending library which allows patrons to borrow Islamic books, is the first of its kind in Wisconsin and was established in 2010. It is thought to be the first one in the United States that serves youth as well as adults in the same vein of a public library. Beyond books, the resource center serves as a meeting place for many social and educational activities.

The IRC is the brainchild of the Milwaukee Muslim Women’s Coalition (MMWC) founded in 1994 by Najeeb, along with a group of professional Muslim women. The organization’s board is made up of highly respected doctors and educators, all women, and the mission statement encapsulates the ideas of these forward-thinking individuals: “To empower Muslim women by providing them with the skills and training necessary for self advocacy, leadership and economic security. To advocate for Islam and Muslims by promoting an accurate understanding of the faith, to encourage dialogue amongst all people, to protect civil liberties and to build relationships and coalitions that work for justice, harmony, peace and understanding.” Najeeb, a mother of five, has received several awards for her activism in Wisconsin from the State, CAIR, and the ACLU. She is also the first Muslim to lead the prayer at the Wisconsin State Assembly.

The following is a Q&A with Janan Najeeb, the President of the MMWC, about the resource center.

Was the resource center an initiative of the masjid or a separate committee/group?

The MMWC runs the IRC. We are independent of the masjid and have our own 501c3. However, we have close ties with the main Masjid (Islamic Society of Milwaukee) in Milwaukee and with the full time Islamic School, Salam School. They are a few miles away from us. Most of the board members attend the main Masjid for Jumu’ah and other events.

How many people does the center serve?

In 2015, we had nearly 5000 visitors. More than half of these are individuals that are not Muslim.

So it is open to Muslims and non-Muslims?

Yes, definitely. That was the main intent of the endeavor, to create a library and Islamic cultural center that is transparent and welcoming for everyone.

What are some of the programs that you offer at the library besides the summer reading program?

We have book clubs; the majority of participants are not Muslim. We have monthly networking brunches on many topics. This month we will be bringing in speakers from Voces de la Frontera, a Latino immigrant rights organization. We have a monthly “So How’s It Going” dinner for reverts, a tafsir group for men and a tafsir group for women, and Arabic classes for middle school, high school, and adults taught by university staff. We host films and discussions at a monthly family film night. We have Islamic poetry/spoken-word slams for college students and young adults, host author talks, and we host a wide range of workshops, for teachers, social workers, students, etc.

We have a number of professors from several universities that bring their students every semester to attend a panel discussion or a book discussion. We also are one of the designated sites for foreign guests of the State Department that come to Milwaukee. We have been the hosts of high school students from Northern Ireland, Yemeni imams, female leaders of NGOs, and Muslim journalists. They consider us unique in the country because we are an educational and outreach organization lead by professional Muslim women and we are highly sought after as speakers. We are a monthly meeting site for one of the main interfaith organizations in Milwaukee, and we co-host the Muslim-Catholic Leaders dialogue. We have hosted a number of art exhibitions, youth leadership trainings, and presentations on important social justice issues.

How did you collect the books? What types of books do you have? Do you have anything else besides books in the library? Media sources? Computers, etc.?

The library currently has about 2800 books, DVDs, CDs, and magazines for loan, just like a public library, but all devoted to Islamic topics. We add new resources every week. We also have two computers for public use. We have a wide variety of resources covering every possible subject including children’s books, theology, Muslim women, hadith, fiqh, Islamic art, interfaith relations, marriage guides, African American Muslims, etc. People get a library card like any public library and they can check out books and resources. They also pay fines for overdue material. We have a professional librarian on staff and we research books from the many Islamic book publishers and book stores and a wide number of others that are not Muslim but print quality material including places like Oxford press and Fons Vitae. It is important to us that we carry quality material with quality writing and printing. We feel there is no reason we should not be a professional first rate facility.

We have a small café that sells cold drinks, coffee, tea and snacks. We also have a small bookstore that sells books, Islamic gifts, cards, prayer rugs, etc., and we have Islamic art exhibited throughout the center.

Who supports the library?

The library is completely sustained by donations. We purchase material as we get donations, and what better sadaqat jariyah [ongoing charity] than a library that promotes knowledge and understanding for Muslims and those of other faiths as well?

Is this a program that could be duplicated elsewhere?

The most important ingredients for the success of this endeavor are regular dua, tireless commitment, and an absolute insistence on professionalism in every aspect of the project. When Imam Zaid Shakir visited last year during his 50 city tour, he stated that this was one of the most unique endeavors he encountered and he said every single city with a sizable Muslim population should replicate it. You can watch his video on our website.

How has the greater community (non-Muslim) taken to this library?

Wonderful response! Universities send us students to intern for the semester and to conduct research using our unique book collection. We are one of the main “go-to resources” for the media, and more than 50 percent of our patrons are not Muslim. The many Masjids send those that call looking for resources to us. Many teachers, particularly non-Muslim elementary school teachers, come in to choose books, particularly children’s story books, to share with their classes during Ramadan. Muslims often refer their colleagues, neighbors, and friends when they are faced with questions they can’t answer or they want to provide resources. And we have people that are just passing by stop in. Since we are not a Masjid and we are a library, the public feels comfortable coming in. Some of our top volunteers are not Muslim! Our numbers grow every year, and at least one third of the attendees at our annual fundraising dinner are not Muslim. I think that says a lot.

Do you have plans to expand the library?

Insha’Allah, as we acquire donations we continue to expand.

Do you have a relationship with the public libraries?

Yes. Our librarian is often contacted by public libraries for suggestions, particularly regarding Islamic children’s books. She has created a list based on the books that are checked out the most by children.

According to the librarian, we have nearly 500 regular library subscribers, this number increases every month. Many others come and read or research at the center.

Is there anything else that you want to say about the library or your community?

Before starting this project, I remember touring many cities across the U.S. I was looking for great examples of an Islamic library that I could get ideas from. Most often, what I found was Islamic bookstores that looked like they belonged in a third world country rather than here in the U.S. I found that very distressing and unacceptable. In addition, there did not seem to be too much concern for professional quality, some of the books had very poor grammar and the printing was uneven and printed on cheap paper. In addition, some of the material was, in my opinion, counterproductive to promoting understanding. So rather than finding a model Islamic library, what I acquired was a list of “what not to do.”

Having an Islamic library and resource center is crucial not only for the general public but also for Muslim children who don’t see characters that look like them, and participating in activities familiar to them, in the books they read in public libraries or their public schools. You can just see the joy on the faces of the children when they open these books for the first time.

Also, this is a very important resource for reverts that need access to accurate information, as there are many that get erroneous information from Muslims who base their understanding on culture, and the library provides them with solid resources. You will be amazed how many Muslim families do not have any Islamic book collection at home; where are these families and children going to get their information? YouTube videos will never replace a good book! We are always looking to expand our library and we welcome financial donations.

Nadifa Abdi Nadifa Abdi has a degree in Journalism with a minor in Political Science. She resides in Northern VA, with her family.